Cympad company from Swiss continues to create innovations designed to meet the needs of modern drummers. Cympad products are represented in Greece by Bulkmusic group

Dimos Dimitriadis
I was born in Thessaloniki and raised in Alexandroupolis were my first touch with a music instrument was with the Thrace bagpipes (gainta). I started practicing the drums under the guidance of jazz master Christos Yermenoglou and later on at the Modern Music School of Thessaloniki, where in my second year i got a free scholarship, and at the Music Workshop. I have played and record many styles of music such as blues, swing, hard rock, punk and black metal. With my bands I have played all around Greece but also in Europe. In July 2016 I participated with my band "The Lost Boys" in Suwalki Blues Festival (PL) alongside with Warren Haynes, Blues Pills, Otis Taylor. Also I have shared the stage with artists such as Marky Ramone, Blues Wire, Vodka Juniors and many others.

Dimod Dimitriadis
I have attended many seminars from artists like Thomas Lang, George Kollias, Joel Taylor, Kostas Anastasiadis. The last years I continue my studies on the piano and in classic harmony. Also I work as a drum educator and as a recording artist as well as playing gigs with my band "The Coreys". I enjoy playing with Rsticks because they provide me with the best possible quality and stability.
Dimos uses Chromatics series, Moderators, Optimizer Starter Pack and Damper Shark.


Available in Optimizer, Moderator and Chromatic Series,
Cympads are an incredible, affordable and easy to use system for optimizing the sound and performance of virtually all cymbal sizes, types and brands.Cympad Optimizer cymbal washers are made from a premium quality cellular foam material and are a major improvement over conventional felt washers. 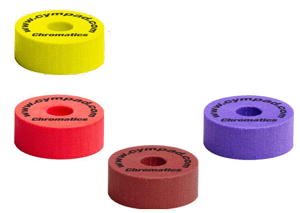